This article was originally written for the Around Town Magazine, June 2019.

Do you want to know the background to our Peace Day Celebration event which we are holding on July 6th 2019 ? Then read on …..

Full details of the events happening around the High Street on the 6th July can be found here.

In the early hours of the morning of November 11th 1918, two days after Kaiser Wilhelm’s abdication Germany signed an armistice. This led to the cessation of fighting along the entire Western Front at 11am. The war was effectively at an end.

However, it was not until 28th June the following year that the most important of the peace treaties was signed which brought a formal end to the state of war between Germany and the Allied Powers: The Treaty of Versailles

In London on Saturday 19th July 1919 thousands gathered to celebrate “Peace Day” witnessing a Victory March of nearly 15,000 troops, a river pageant and a day of festivities.

Around the country similar celebrations were held – and Billericay was not going to be left out! In our collection we have a large poster advertising the Billericay Peace Day Celebrations.

Star attraction in the morning was a procession encircling the town – from Chapel Street to Western Road via Sun Street and London Road, up the High Street to the cricket field. A  century ago Billericay was a village of about 2,000 inhabitants, much smaller than today’s commuter town of over 30,000. Most lived on the three main (and unpaved!) roads: the High Street, Chapel Street and parts of Western Road – so it’s likely that the entire town took part in, or witnessed this procession. 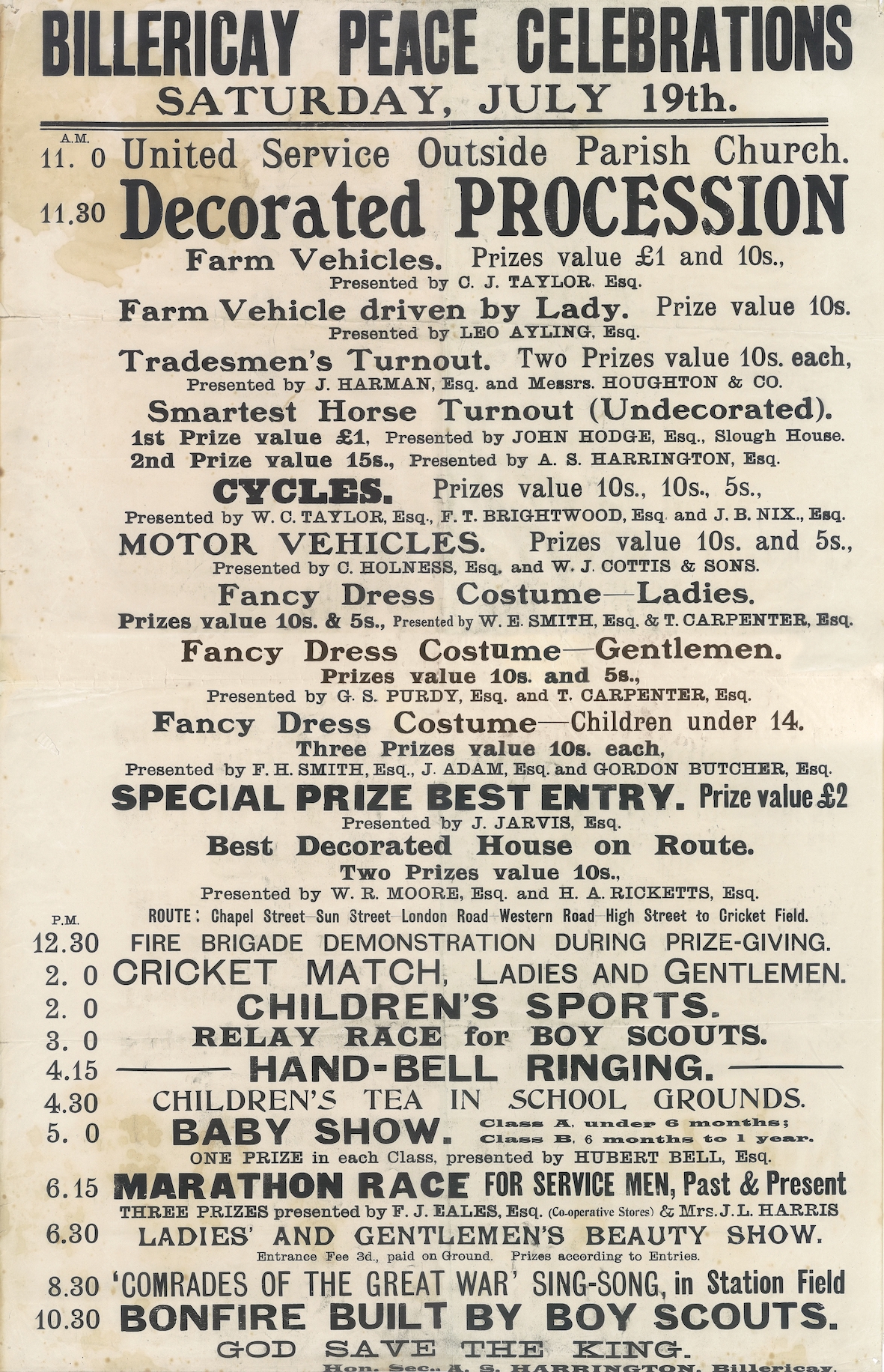 There are some notable names presenting prizes in the poster: Fred Eales who lived in the building that now houses the Cater Museum presented prizes for the “Marathon Race”; Thomas Carpenter was responsible for the railings outside Burghstead Lodge and what is now the Library, whilst people still remember W.J.Cottis & Son’s bakery on the High Street. William Cottis and his wife Kezia lost two sons in the war: Pte Edwin Cottis was sadly killed in March 1918 whilst his brother Cecil died in action in September.

You’ll be able to see where a number of the people mentioned on the poster lived, along with many of those who lost their lives on a guided High Street walk during our Peace Day Commemoration event on July 6th.

The Cater Museum is open Monday to Friday between 2pm and 5pm and Saturday between 1pm and 4pm.