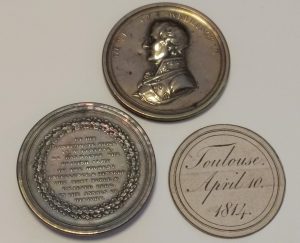 The Battle of Toulouse was one of the last battles of the Napoleonic Wars and signifies the virtual collapse of the French empire. Toulouse was significant to the French and the region in particular as it was the regional capital. It was resolutely defended by the French who held it for two days before withdrawing from the city, with the knowledge that Napoleon had abdicated and thus the war was essentially over. Following the patterns of some of the previous battles, it is unclear which military force had prevailed and could claim victory. The French inflicted far more casualties on their British opponents and simply withdrew, eventually agreeing an armistice, while the British had taken the stronghold, but not by force and at a high cost of lives. Overall however, the Allied forces claimed victory in the war and would not be threatened until the battle of Waterloo two years later, which they would win decisively.