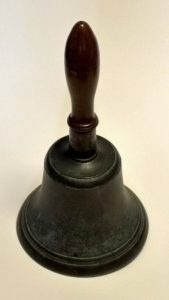 This hand bell was used by two of Billericay’s Town Criers to gain attention before they made announcements to the town.

The bell was owned originally by Thomas Gentry, a Billericay Town Crier in the mid 19th century. It was passed from Thomas to his successor, Arthur Barfield. Arthur’s daughter returned it to a member of the Gentry family and it was Thomas Gentry’s great-grandson, Charles Cooper, who later gifted it to the Cater Museum’s first curator, Harry Richman for his collection of local objects.

Thomas Gentry’s son, Charles, was Billericay’s (and Basildon’s) postman. His daily round, which he would walk or half run, was 16 miles!