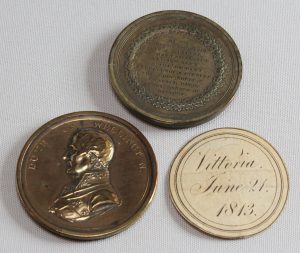 The Battle of Vitoria in June 1813 in Northern Spain can be seen as a decisive moment in the eventual downfall of the Napoleonic Empire. Although the French empire would survive for another two years, the battle at Vitoria in Spain marks the collapse of Napoleonic rule in Spain and therefore one of the first crises of Bonaparte’s reign. The allied army under the command of the then Marquess of Wellington successfully captured or destroyed 151 guns and inflicted 8,000 French casualties, breaking the French military presence in Spain. While it was a decisive victory the allied casualties was over 5,000 and they had missed the opportunity to capture the King of Spain, Joseph Bonaparte, Napoleon’s brother.