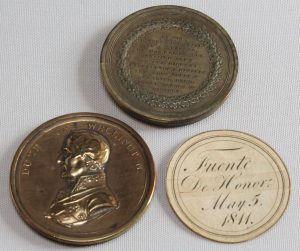 The Battle of Fuente De Honor took place in Spain on the Portuguese border. Similarly to previous battles it was a combined force of British, Spanish and Portuguese troops against Napoleon’s Grand Armèe. Wellington and his forces repelled the almost 50,000 strong French army at their defensive stronghold, reportedly killing at least 2,500 French troops. The result was not completely decisive; however, it could be argued that it was a marginal British and Portuguese victory, as they suffered fewer casualties. This battle followed Wellington’s capture of Portugal from Napoleon’s forces and his defense at the Lines of Torres Vedras. Wellington admitted that he probably could have lost the battle, and possibly would have done had Napoleon himself been present. However, Wellington was against Massena, one of Bonaparte’s generals and so was able to successfully continue to blockade the town of Almeida after winning the battle.